I’ve decided to do some specializing in a stock of ore of all types.  Easier said than done, some days!   Even though we’re out on the first listed day of a spawn, we’re finding that traveling all over several planets we get nothing but RESOURCE NOT FOUND or, almost worse, a 44% spot in the mountains!!! is the best anywhere.   Unless I need only a small amount of a specific resource, I don’t try to place harvesters on anything under 60%.   Naturally you really want a nice 80% and more spot, on flat land, not in or near a city, with no lairs you’d need to clear first.   Hmmf.

I’m catching up on my crafting with several characters.

My Master Artisan will also someday be my Weaponsmith.   I’d like to specialize in Melee Weapons, and also offer a broad selection of beginner weaponry.  I think they’re always needed but aren’t big money items so once people get good resources they often just sell the high end things.  We shall see.   I’m going the Munitions route from the Slackers Guide To Making Master Weaponsmith by building 1,779 weapons.   Pretty scintillating, eh? 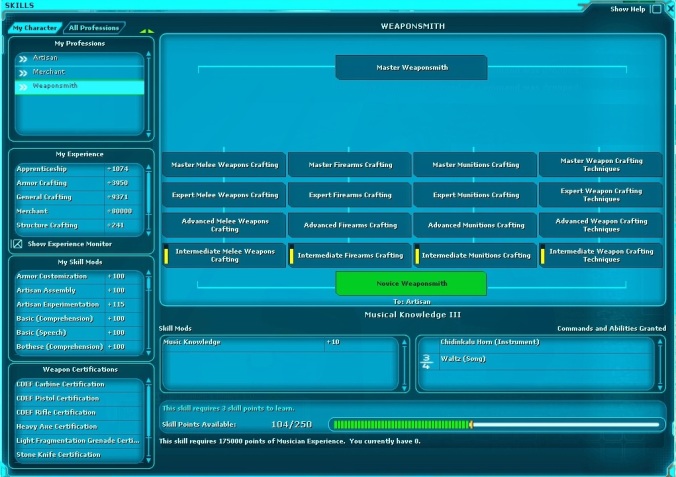 My Architect now has a nice basic set of all city buildings for sale.  For the first time I’m making Gardens, starting with all of the Naboo types.

There’s now a Small Garden “Gungan Guardians” in front of City Hall.  I like the way it looks.  The small gardens add 10,000 cr per week to City Maintenance.

My Architect’s second profession is intended to be Droid Engineer.   In order to stock City Shuttleports, I needed Advanced Droid Frame Units.

That Ticket Taker at your friendly neighborhood Shuttle requires them.  Unable to find them for sale for quite awhile now, I’ve been slowly working towards Advanced Droid Blueprints.  This week I got there, yay!   I made a few extras and they’re for sale in case anyone else can’t find them and doesn’t want to create a DE to get them.

My Tailor finally has all the backpacks in stock, and will be back making clothing again this week.  I’m also making Tailor Components to sell in keeping with the city goal of offering all the basic items and resources you need for crafting.

My Smuggler to be has about 50,000 of the 75,000 or so needed to train Unarmed 4.  It’s been all Rebel missions so far, which has gotten her Lance Corporal in the Rebellion.   The Rebellion grind will go much faster once I can switch her combat back over to Pistols.  For now, it’s boot boot, kick kick.

Update! Three and a half Bol missions on Dantooine got Unarmed 4.  I couldn’t bear to drop Master Marksman yet so I dropped a line in Scout to pick up Novice Smuggler.  And…it isn’t all Pistols. there’s Slicing of containers, a weird random mini game.  More on that next week.

A Fool and His Sinome

My Entertainer is going Master Musician/Master Dancer, so my dear spouse’s Total Fool character is happily working on Pistols/Fencer and has dropped Entertainer (He was going to be Master Dancer).   In memory of his most entertaining ways, here he is with his Rodian Counterpart. 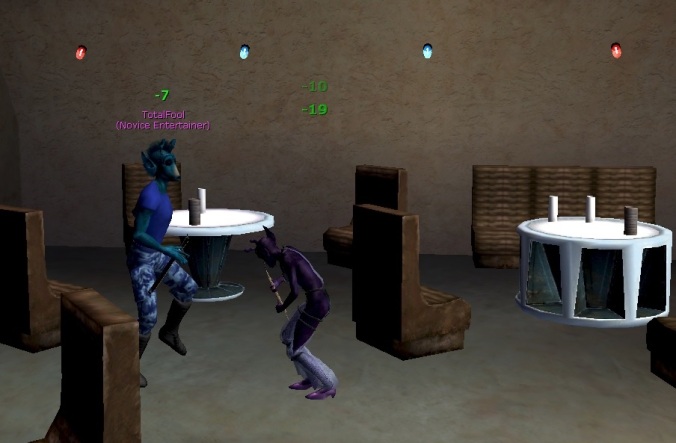 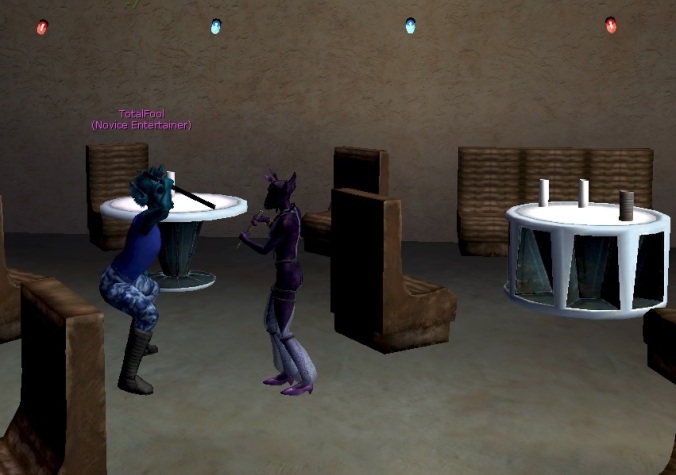 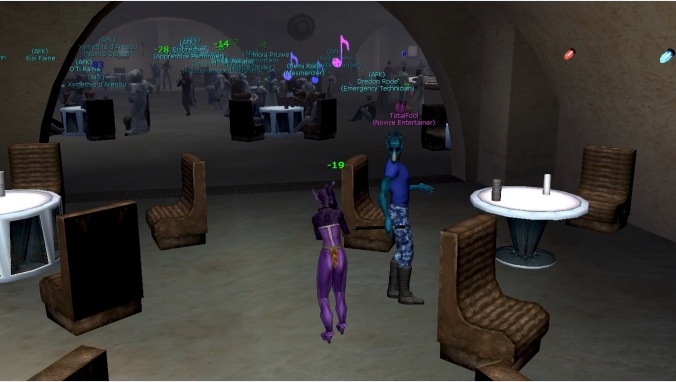 I had my Rodian Entertainer’s body coloring changed for the Christmas party she went to.  So instead of a nice purple, she’s green.

I have to get her changed back.   All I can think of when I look at her now is this.