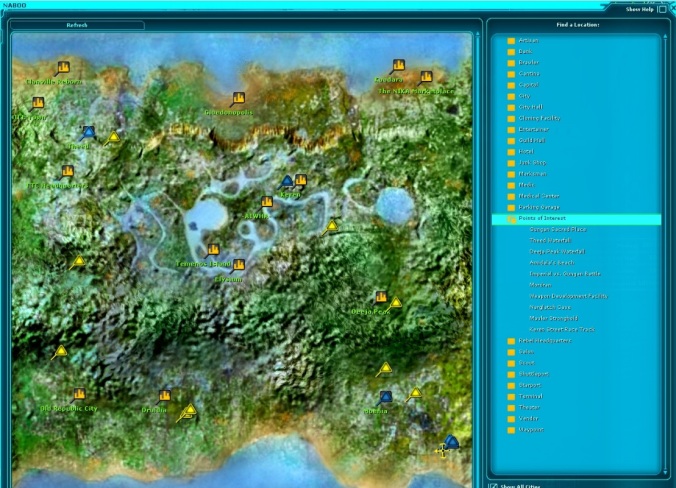 I decided to visit all of them, getting the waypoints and getting a badge if there is one.  Not all locations give the exploration badges, and not all badges are at the waypoint for the POI.

Starting from our city, I went counterclockwise on the map.

The Narglatch Cave   is just outside Moenia.  Lots of people use the caves full of Narglatch to level up.   There is no badge for this POI.   It is located at 5838  -4666

Imperial vs. Gungan Battle      I see people asking where to grind Rebellion points all the time, here’s a great place to start.   My Live game Colonel(s) spent a lot of time here shooting those Imperials in Green Armor.  I don’t know about now, but they respawned so fast in Live, you could hardly loot them before another popped up.

Deeja Peak Waterfall     Deeja Peak is always pretty quiet.  It used to be one end of an Artisan Mission run that paid out nice credits 1400+ per.   For some reason the EMU has a aggressive NPC near the Theed shuttle you’d go to, so those aren’t a great way for new artisans to make money anymore.

The waterfall here isn’t the POI, but waterfalls are fun to drive over and free fall for a bit, though this one won’t let you go over the edge, you have to go around and the POI is at the end of a bridge.  This one has a badge, but I did not get it myself.   I’ll go back and try again sometime.      The badge is not at the waypoint for the POI, that I can say. 5172 -1550 is the POI waypoint.

The Mauler Stronghold didn’t sound like a pleasant POI.   When I got near I saw all the red dots inside the house nearby.  The NPC’s outside  I clicked on were blue to me though, so I wasn’t worried.  Still I put away my swoop when I made my way over to the waypoint.   Bammo!  Toasted and sent to the cloner by Issimo (A Mauler Master).   Good thing you can write down waypoints while dead.    2962   1108      No badge here, only death.

The Keren Street Race Track was super handy, as I got a free cloner trip to Keren as the nearest cloner.  Speedy travel!   I’m trying to talk my dearest into running the races with me for a post, starting with Keren, but he’s resistant.   There is no badge for the Keren Street race, but try it anyway!  The start of the race is just outside the Keren Starport 1396 2686.

The Theed Waterfall POI is just around the corner from the Theed Spaceport.   Go over the falls and drive back and forth at the bottom till you see Badge:  The Bottom of the Great Falls at Theed!     The waterfall POI is  -4626 4207

Amidala’s Beach is the name of the next POI.  It’s way out on the water and it is a pretty innocuous little island.   Even so, it’s a Badge for Amidala’s Private Beach and the POI and Badge are in the same waypoint  -5828  -88

The Weapon Development Facility  is loaded with Rebels or Imperials, it changes hands if players of the opposite faction clear out and take over the base.  No badge here, the waypoint for the POI is -6457 -3236. 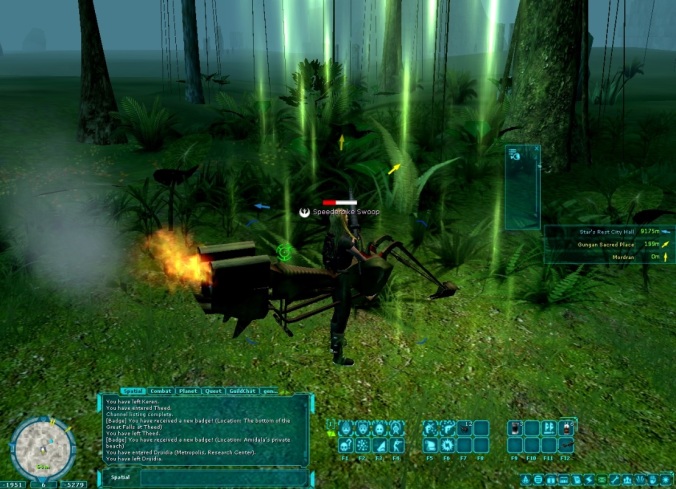 I’m looking around, wondering about the two people standing under a tree nearby, and decide to head home.   I go a few meters and ping, ping, I’m under attack.   I just kept going, but I did look up Mordran: 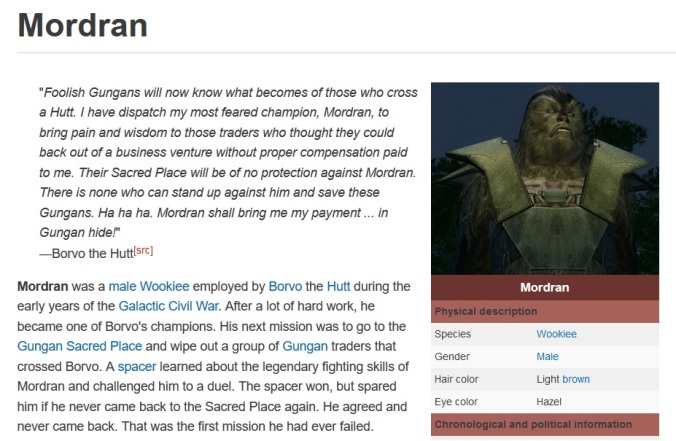 I’ll visit him next time and see if he knows the Mauler Master.

Making sure I had the Badge locations, I used (after I went on my tour) the  SWG Guide Ultimate Badge guide http://everquest.allakhazam.com/wiki/SWG_Guide__Ultimate_Badge_Guide

I also found this guide for future Galactic Tours: